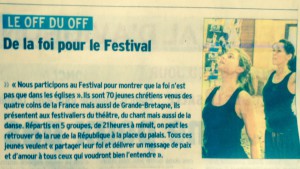 There was a reporter that was really touched by our prayer dance through the city that he decided to write an article titled « Some Faith for the Festival » which says ( in English): « We participate in the festival to show that faith is present out side of the physical building of the church. »
They are 70 christian youth who come from all corners of France and Great Britain (we also have an american, a Brazilian, and some Italians and Spaniards as well but he didn’t know that).They do theater, sing and dance. Separated in 5 groups, from 9 to midnight you can find them from Rue de la Republique to Le Palais des Papes (two major tourist destinations). All that the youth want to do is « to share their faith and to deliver a message of peace and love to all who are willing to hear. »